Previous Celtic settlements existed in and around Orange. A major battle, which is known as the Battle of Arausio, was fought in 105 BC between two Roman armies and the Cimbri and Teutones tribes.

Orange was the capital of a wide area of northern Provence, which was parceled up into lots for the Roman colonists.  During the Roman Empire, 120 BC to AD 476, the village farms, and large rural holdings increased. In recognition of service, veterans received plots of land. Thus Orange hosted the veterans of the Second Legion who also settled in the territories of Mondragon, Uchaux and in the hills of Châteauneuf. Various objects from Roman times have been discovered in this area. These include clay, glass, bronze and iron objects, as well are bones, jewelry and coins in bronze, which were found in a vineyard in Châteauneuf in the lieu-dit Bois Sénéchal (in the eastern sector). It is a fact that one of the great Roman roads, the “Via Agrippa”, connecting Lyon to Arles, passed on the land, close to the Rhône, between Châteauneuf, Sorgues and Orange. 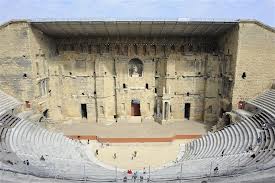 Arausio expanded around the existing Roman remnants for which this area is famous. The amphitheatre, probably built during the reign of Augustus (27 BC), is the best preserved of its kind. As the Roman Empire declined during the 4th century, by which time Christianity had become the official religion, the theatre was closed by official edict in 391 AD. This because the Church opposed what it regarded as uncivilized spectacles. Orange became an independent county in the 11th century and later passed to the House of Nassau.

Exceptional witness of the UNESCO World Heritage Site, the ancient theater of Orange is the best preserved in Europe. Built at the beginning of the Christian era, it owes its reputation to the remarkable preservation of its stage wall. It has all the components of the Latin Theatre by Vitruvius: the cavea (semicircular tiers), side access and stage wall flanked parascenia. Designed to accommodate the Gallo-Roman public, it was a place for the dissemination of culture and the Roman language. 9000 spectators could attend tragedies, comedies but also to dance, acrobatics and juggling. 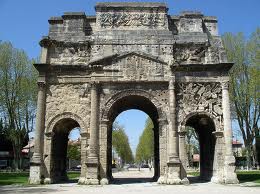 The Arc of Orange erected north of the city, 70 meters high at the north of the wall. It is a very solid three doorway whose decor evokes the omnipotence of Rome building. On the north and south sides, Celtic weapons of the period of independence appear as hung on a wall fan, on its east and west sides, the Celts are represented chained. Weapons and captives seem eternal trophies carved in stone recalling the permanence of Rome triumphant domination exerted on the peoples of the region. 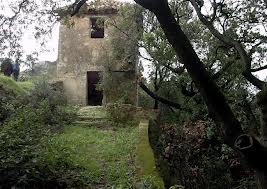 Roman rampart and cemeteries: a Roman gatehouse was discovered on the site of the present cemetery.

*The Castle of the Prince of Orange, razed to the late seventeenth century by order of Louis XIV.